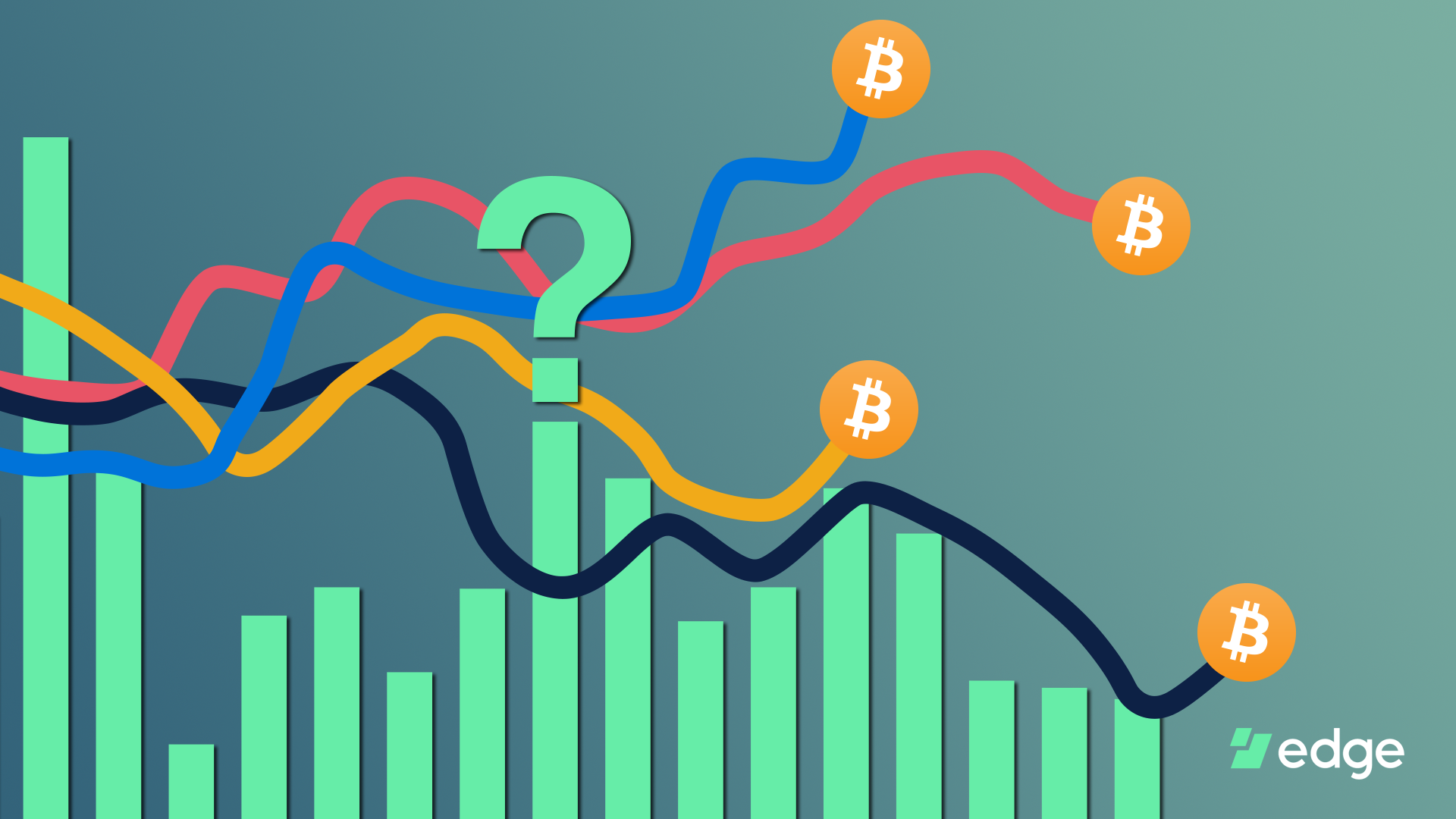 Many in the crypto ecosystem have attempted to generate ways to price or value crypto-assets, especially Bitcoin. The industry and intrepid onlookers have wanted something firm to stand on amidst all of the hype, volatility, and speculation. In this post we’re going to give a quick run down of some that are publicly known and openly mentioned with some regularity.

Keep in mind that these models are supposed to give us a way to think about Bitcoin’s value or pricing and are not definitive or exhaustive in any way. Each model should be looked at in combination with the others. Each adds its own perspective but also might leave out some important information that another model might take into consideration.

One of the main value propositions of Bitcoin is its introduction of digital scarcity. The only way to create a new unit of Bitcoin is to do the appropriate work under the rules of the protocol. A unit of Bitcoin can’t be copied or conjured outside of certain constraints and the Bitcoin protocol has a strict production schedule that eventually ends about ~100 years from now. In a world used to infinite copies of digital objects and the eagerness of Central Banks to debase their own currencies, this is a big deal.

Financiers, economists, and accountants have historically used the terms ‘stock’ and ‘flow’ to distinguish between the amount of an asset that already exists (stock) and the amount of an asset that comes into existence over a given period of time (flow). One of the main attractions of two of the oldest monies in history, gold and silver, is their physical scarcity. This scarcity is exhibited formally in what’s known as a stock-to-flow ratio.

The stock to flow model boasted in the Bitcoin community makes this stock to flow ratio the key input in Bitcoin’s market valuation. This model, advocated by some in the Bitcoin community, has mapped nicely to the price history of Bitcoin. This gives the model some credence because of its tight statistical relationship. The model is not exact by any means, none are, but it is impressive how well this model has explained the price behavior of Bitcoin with only one major input.

However, there’s no guarantee Bitcoin continues on the trajectory mapped out by the model and the model is most useful for big moves over a long period of time. For anyone looking to the model to reveal what the price of Bitcoin will be in a month or so are going to have to look elsewhere (assuming that exists). It’s not useful for short time horizons other than showing possible levels of over and undervaluation within a large band of possibility

There is no guarantee that the model’s relative success continues but it’s safe to say that scarcity is a powerful attractor to Bitcoin. Bitcoin’s current stock to flow ratio (~25) is scarcer than silver (22) but behind that of gold’s (62). However, after the upcoming May halving, Bitcoin’s stock to flow ratio will double to 50, moving it even closer to gold’s. By 2022 Bitcoin will surpass gold as the scarcest money on the market.

As the ratio that measures scarcity increases substantially with each halving, it shouldn’t be surprising if market participants re-value it to reflect those changes.

Useful links to learn more about stock to flow:

This way of thinking about Bitcoin or a comparable crypto-asset doesn’t describe the behavior or try to describe the pricing behavior of the asset but rather looks at its possible potential and deduce a range of possibilities based on an investor’s particular assumptions.

The market for money is massive and has been dominated by precious metals and governments but it’s conceivable cryptocurrencies could be a part of that mix in the future. There are a few large markets Bitcoin or another crypto-asset could gain a significant chunk of.

Bitcoin and others are their own unique entities that have a blend of attributes that make it able to serve as money.They’re divisible, portable, durable, fungible, a natively digital means of exchange, and a natively digital store of value. For institutional investors, especially compared to the average consumer, money has an expansive range of definitions and categories. Gold, fiat currencies, short term sovereign debt , money market funds, all have their own attributes and have a unique place in the financial ecology serving money like functions in modern portfolios. Since crypto-assets have the seeds necessary to be another money option, with their own unique position in the ecology, many investors see it attracting some of this value in the ecology.

Gold is almost a 10 trillion dollar market that has an investor class that has ideological sympathies with Bitcoin.  Many in the precious metals space have already taken positions in Bitcoin or are at least open to it as another non-sovereign alternative in their portfolios.

Foreign reserves, fiat assets that central banks hold, is about a 13 trillion dollar market. We know that there is international tension and many countries would like to have an alternative to the USD and EUR. Many sovereigns don’t like pricing their goods in another country’s money and don’t enjoy being dependent on financial architecture controlled by some other country.They also might not have the ability or the trust of others to set up an alternative to the financial plumbing set up and controlled by operators of the USD and to a lesser extent the EUR. Many sovereign entities or entities adjacent to those sovereigns are in the market for alternatives and Bitcoin or some other neutral platform are plausible ways of sidestepping the current international financial system.

Crypto-assets like Bitcoin could also be used as risk mitigation tools for not only a portfolio of foreign reserves but also the typical diversified portfolio of stock and bonds. Adding a non-correlated or a negatively correlated asset is often used as a strategy to increase the fitness of a portfolio. The global market capitalization for global stocks and bonds is approximately 180 trillion at the present moment. For simplicity sake let’s say the typical world portfolio is 45% bonds, 35% equities, 10% fiat currency, and 10% gold. Crypto assets are largely de-coupled assets from many of the risks that the others might hold, and in some cases might act inversely to how the others act in a certain context. Shaving a percentage off of each asset and allocating that portion to Bitcoin could be used as a way to boost performance and mitigate risk simultaneously while not really sacrificing that much of their positions in any one of those verticals.

So if we build out these three large use cases, which are not exhaustive and are non-zero possibilities, we can be highly conservative and come to a future valuation of Bitcoin and other crypto-assets.

This is hypothetical, but if we assume that Bitcoin and other crypto-assets capture only 1% of the territory laid out above (205 Trillion in total), this would translate into a valuation of $2.05 Trillion. This would be about a 10x (1000%) move up from current levels.

Ok we think these are non-zero possibilities, now ‘when’ becomes the operative question. How quickly or slowly do we think this could happen? You could build out different models with different timing contingencies, meaning you could project this 1% move happening 1 year, 2 years, 3 years, 4 years, 5 years, etc from now and assign a discounting rate or even different discount rates on each temporal possibility and pull those possible future values into the present for a present value. Depending on your assumptions, today’s prices could be just right, underpriced, or overpriced.

The NVT model isn’t looking at the potential of the network but it tries to get a gauge of the relationship between market value and activity on the network. The NTV Ratio with some statistical smoothing of 90 or 120 day moving averages have been pretty accurate in showing when the network is under or overvalued. A smoothed(90d or 120d) NVT ratio greater than 75 has shown pretty consistently that a price correction down is imminent. And a smoothed NVT lower than 35 has shown the inverse, a price correction up is imminent. The NVT ratio can be looked at similarly to the price to earnings ratio used in traditional equity valuation. A simple measure that can quickly be used to get a gauge on how expensive or cheap a security might be. NVT seems to serve a similar function for crypto-networks like Bitcoin.

Keep in mind that “on-chain transaction volume” can’t take into account off-chain activity. This in-ability to incorporate off-chain activity is a mixed bag. It rightly leaves out off-chain activity like trading on exchanges that only serve the economic function of speculation but on chain metrics might be a little less useful going forward if off-chain economic activity increases. But for the time being it’s a pretty good indicator of economic use.

Metcalf and other “Laws”

Specifically, Bitcoin price changes tend to be highly correlated with changes in number of wallets, active addresses, unique addresses, transaction activity, etc which are proxies for user and user activity. Although the classic Metcalfe equation, network value = n2, has overstated network value in Bitcoin historically, modified versions of Metcalfe’ Law and other “laws” like Zipf’s law (takes into account hierarchies of users) have been useful and pretty descriptive of Bitcoin and other network’s value.

The fundamental proposition of these models is that network value moves non-linearly in proportion to the number of its members or users. As more people join a telephone network or social media network its value increases exponentially not linearly.

The previously discussed methods of valuation covered Bitcoin’s scarcity, its total addressable market, its relationship with transaction volume, and its relationship with new users joining the network. Hopefully this set of four can give you some footing and insight into what potentials there are and what thresholds to keep a tab on. The future is highly uncertain and future pricing is notoriously impossible to nail down, but we do it anyway because understanding a range of possibilities leaves us more prepared and less surprised than if we had no framework(s) to ground our decision making in.