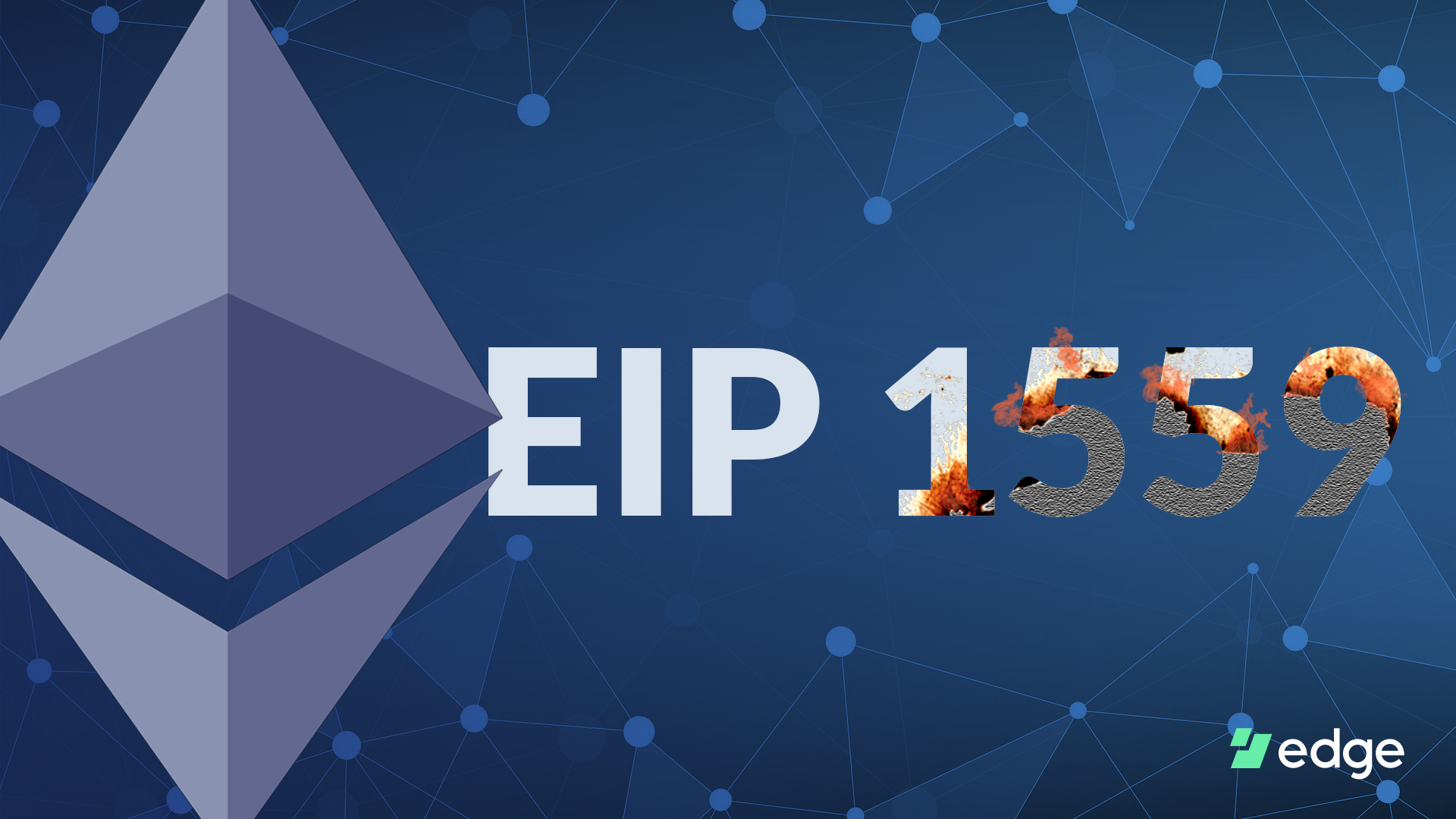 Ethereum Improvement Proposal (EIP) 1559 has generated incredible excitement over the last few weeks throughout the Ethereum community. This EIP is a redesign of the Ethereum fee market, motivated by a desire to improve the user experience, which can be volatile and expensive due to rapid fluctuations in demand for block-space. These wild swings in demand make it extremely difficult for wallets like Edge to estimate the appropriate fee level for users, resulting in both needlessly high fees and dropped transactions.

However, the original purpose, improving the user experience, is not the source of most of the community’s excitement. As a result of the mechanics of the redesign, some of the fees paid by users will be burned by the protocol instead of being distributed to the miners. This burning of transaction fees reduces the inflation rate of ETH and at times of high network utilization, ETH’s monetary policy can even turn deflationary. Holders of ETH are ecstatic about the proposed fee burn and the change could entice more investors to get off the sidelines and put some capital into ETH.

The Ethereum fee market currently operates as a first-price auction, similar to other crypto networks. Users declare a fee they are willing to pay for processing their transaction and miners respond rationally by processing the highest bids first while relegating the lowest bids to a longer wait. Users pay exactly what they bid, no more, no less. First price auctions are simple to construct and understand but are known to maximize revenue for the seller of a service or product. In the case of Ethereum, miners’ revenue is maximized and user cost is maximized.

Wallets that calculate fees on behalf of users, and users entering fees themselves, often overbid out of ignorance of what others are bidding and out of the fear that their transaction won’t be confirmed in a reasonable amount of time. On the other hand, wallets and users can easily underbid with a seemingly appropriate fee, based on the recent past, but due to a sudden demand spike for block space, their transaction can be pushed way back in the transaction queue, delaying the confirmation of their transaction considerably or even causing the transaction to be dropped by the network. Volatile oscillations in the fee environment result in a poor user experience due to overpaying miners for block-space or underpaying and risking a severely delayed or even dropped transaction.

EIP 1559 attempts to smooth out these spikes and make it easier for wallets and users to estimate the appropriate fee so as not to overpay or underpay for their transactions.

If EIP-1559 is accepted by the network as expected, instead of having one value represent a transaction fee, transactions will have to submit three values: a Base-fee (minimum fee), a Tip (inclusion fee), and a Cap-fee (maximum fee).

In addition, users won’t be punished for over-bidding or underbidding on the Base-fee like they would in the current system. If a user over-bids the Base-fee they’ll only have to pay the lower Base-fee since they are still willing and able to pay that minimum. If they underbid the Base-fee they still have a shot for inclusion given that their Cap fee (max amount they’re willing to pay) is above the minimum base fee plus the tip they’ve included in the transaction. This set-up is designed to limit the occurrence of overpayment and dropped transactions making the user experience better for everyone.

What makes holders of ETH so excited about this proposal is the fact that the entire Base-fee is burned every block! The burning mechanism was instituted to discourage any manipulation of the Base-fee by miners since whatever manipulation they engage in will be burned anyway. However, as a side-effect of this attempt to dissuade manipulation of the Base-fee, ETH becomes less inflationary and even deflationary under certain circumstances, which we’ll circle back to later.

The burning is neat, but this begs the question, how do miners get paid? Miners are still paid by the block subsidy and also collect the tip (or inclusion fee) we mentioned earlier. A tip can’t be zero, it must be included, but these should be small since if a user can pay the minimum Base-fee plus a small tip their transaction should get confirmed fairly quickly. Only in times of rapidly increasing demand where blocks become congested would there be a bidding war with increasing tip amounts that resemble the current first-price auction model. However, these tip bidding wars are designed to be short-lived as the increases in the Base-fee move exponentially, attempting to bring blocks back to half full.

As we’ve stated before, this EIP is designed to create a smoother, more predictable fee market, resulting in a better user experience. However, the burning of the Base-fee has stolen the show amongst investors and media.

The burning is said to “harden” the ETH asset by making it more scarce or less abundant in the market. This makes current holders thrilled because their share of ETH won’t be diluted at the projected inflation rate in place before this proposal was introduced. It could also attract more investors to ETH given its expected inflation rate is set to decline and ETH exists amongst a backdrop of ever-expanding fiat money heading in the opposite direction. And not only is the inflation rate set to contract but during times of high utilization of the Ethereum network, when base fees are greater than the sum of tips and block subsidies, ETH monetary policy turns deflationary! This means during times of high block congestion, ETH is burnt at a faster pace than ETH being created, making it even more scarce in the marketplace.

Although the proposal has been met with considerable fanfare in the greater Ethereum community, many Ethereum miners aren’t happy with the proposal since it slashes a considerable amount of future fee revenue. We could see a hostile fork happen led by disaffected miners. If a hostile fork does in fact happen, although not ideal, this prospect doesn’t seem to pose an existential risk at this time. Many miners do support the proposal and there doesn’t appear to be much if any pushback from the greater Ethereum ecosystem.

The Ethereum community acknowledges that this proposal does cut at miner revenue quite a bit, but they’d point out that Ethereum miners have made a fortune on users overpaying for fees and that the proposal boosts the scarcity or hardness of ETH. This hardening allows miners to indirectly benefit or make up for their lost fee revenue by being able to fetch a higher market price for their now scarcer ETH holdings.

Also, this proposal doesn’t completely remove the possibility of price auctions emerging around miner tips. During times of block congestion, the fee market will have to revert back to the first price auction model to determine which transactions will be included in the next block. During times of high network activity, miners will have to discriminate between transactions based on their tip amounts when there are more transactions willing to pay the Base-fee than can fit in the max block size. The fee market is supposed to adjust to this fairly quickly by pushing up the Base-fee high enough to remove the need for a tip auction. But nonetheless, the first price auction mechanism doesn’t fully go away under this proposal.

And lastly, even though the monetary policy is said to decrease the inflation rate, this proposal makes Ethereum’s monetary policy more unknowable or unpredictable than beforehand and again demonstrates the Ethereum community’s willingness to tinker with monetary policy.

This might make some uncomfortable, but we’d argue that focusing on the exact future monetary policy is over-valuing the monetary precision of ETH relative to the monetary direction of ETH, which should be more important to an ETH holder. A holder should prefer an imprecise deflation or reduction in inflation over a precisely defined increase in inflation. And the Ethereum community has always valued usability over a precise, unchanging monetary policy, so this change shouldn’t be a surprise to ETH holders.

As of today, this EIP is expected to be included in the London hard-fork, which is slated to activate sometime in July 2021. As a wallet that supports many ETH holders and experiences the difficulties of estimating fees, we look forward to this unique change to Ethereum.