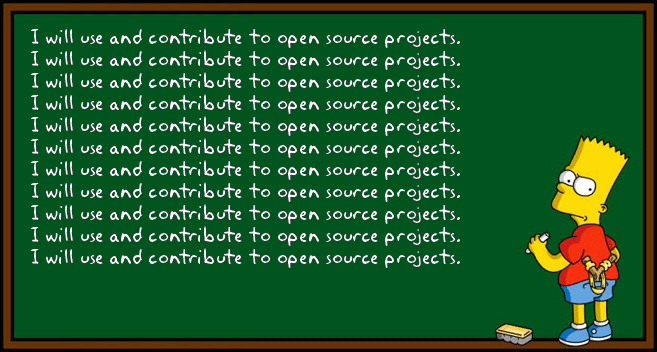 When computing was in its infancy in the 1950s and 60s it was dominated by large academic, government, and corporate institutions who were generally collaborative and shared many of their resources. Hardware, software, and information was broadly shared by dedicated groups of researchers pioneering a new world of bits and bytes.

By the late 60s and early 70s, software, which previously was bundled with hardware started to split off from the underlying hardware becoming a product all on its own. As computing became more complex this fed into increased specialization which in turn creates more complexity, generating a feedback loop that can be seen over and over again in technological innovation mixed with the realities of economics.

Early on software was not considered a product that could be copyrighted but this changed in 1974 with the US Commision of New Technological Uses of Copyrighted Works deciding that authors of software programs could indeed seek copyright protection. In the late 70s and early 80s computer and software companies started protecting their work through copyright laws, charging for the licencing of their software, and stopped distributing the source code to their users. By the mid-80s the closed source software business model was in full force.

Many in the software community were concerned and upset about this trend of walling off source code from the inspection of users and the increasingly closed nature of software development. The frustration and anger of hackers and hobbyists like Richard Stallman led to the creation of the free software movement which tried to recapture the spirit of collaborative software development and the transparency of sharing source code that was the norm in the early days of computing. Stallman and his like not only thought this would produce a better society but better software.

Out of this movement we witness the development of many free software projects such as the GNU project started by Stallman and the Linux Kernel that are at the foundation of many of the products and services we use today. Starting in the mid-90s and continuing on into the present day many of our systems rely upon a stack of free software. The movement’s insistence that free source code and free development would produce at least as good and often better software than their proprietary rivals has proven to be true.

Keep in mind “free” in this context doesn’t mean no cost although it could be priceless software. At minimum free means accessible, open, and transparent. The word free was a contentious word and threatening to for-profit companies who many in the free software movement were trying to steer away from their proprietary software business models. Eventually in the late 90s and onward the phrase “Open Source” became used by the movement and this wording has gained traction in the industry and media ever since.

In 2008 Satoshi Nakamoto, in the spirit of the free software movement, launched Bitcoin as an open source software project. The source code was accessible to anyone who had interest and collaborators all over the world were free to work on it and modify this new open source money. Since that time there has been an explosion of open source monies, many being just slight alterations to the original source code produced by Nakamoto. Being open source has been crucial to these projects generating trust and a distributed network of contributors willing to develop the project and move it forward without a central party.

Our co-founders had worked in closed software development environments during the 90s and 2000s and saw first hand how it slowed down development, innovation, reduced trust, and understood why it was antithetical to a free and open society. Inspired by the common ideals and accomplishments of the open source software movement and the Bitcoin community, our co-founders launched an open source Bitcoin wallet named Airbitz in early 2014.

Since then we’ve expanded our offerings and rebranded to Edge but have kept our commitment to being open source. Ultimately we’re a security company that develops software for protecting and facilitating the use of digital money. We think its critical to be as transparent as possible so anyone could examine our source code and check that we are in fact architected the way we say we are and as private as we claim to be. If an individual or group wants to evaluate how we employ client side encryption of private keys, they can. If they want to check that we don’t collect any private information from our users, they can.

Being open source isn’t just naked idealism, it’s also a way to generate trust and thus users and business for our company. In addition our partners and other outside parties have easy access to our code base and have the ability to patch up, fix, and improve our repositories. The more eye-balls and help, the better we, our partners, and our users do.

Our openness does give up some company privacy and much of our available intellectual property rights but we’re ok with this as it keeps us honest and focused on innovation, constant development and away from focusing on building black boxes around our software.

For those interested in examining, auditing, or contributing to our code, check out our GitHub page!